I can only assume that this is Instagram’s new way of shoving suggested material down my throat.

Today I counted 100 posts in my newsfeed and found the following instances:

The statisticians will tell you that this is a Gunk Quotient (GQ, a statistical term) of 61% and that the “because you watched” (BYW) posts are currently my newsfeed’s statistical “mode”–the most common posts. And most of those BYW posts are bogus references to videos that I did NOT watch, as above.

The odd thing is that this is only in the mobile app’s newsfeed. When I view Instagram in a browser, the GQ is much lower.

I’ve searched in vain to find a way to turn off BYW posts. Does anyone know how to shut them down? Or must I delete the Instagram app from my phone, as I have already done for Facebook?

Why can’t Google get biometric login (aka, fingerprint and face recognition) right on its Pixel phones?

I am a Android fanboy who generally loves Google’s Pixel phones and has not owned an iPhone since, like, version 1.0. But I have been repeatedly disappointed by Google’s implementation of fingerprint and face recognition for login purposes.

Case in point: the Pixel 6 Pro that I obtained two weeks ago has the most unreliable fingerprint reader I have ever encountered. And I am not alone in this opinion–as a Google search quickly reveals:

My main beef with the fingerprint reader is its unreliability. I’d say it responds after a single press about 40% of the time. More aggravating is that about 10% of the time it does not work at all. And I am forced to enter my PIN. Oh, the inconvenience of it all!

Perhaps this would not be as annoying if the previous Pixel–the Pixel 5–did not have a perfect fingerprint reader. It was in just the right place (the middle of the phone’s back) so that my finger naturally felt it when I pulled the phone out of my pocket. And the only times that it could not read my finger correctly was when it was wet or the print was otherwise obscured.

Additionally, the fingerprint reader was a huge improvement over the biometric reader of the previous Pixel release, which relied solely on face recognition. The Pixel 4’s face recognition seldom worked as advertised for me and then (hello, COVID!) when I started covering my face it became utterly useless. In fact, I bought the Pixel 5 mostly to escape face recognition.

Man, I loved the Pixel 5 fingerprint reader. When Google announced that it was moving the reader from the phone’s back to the screen on the front, I vowed not to buy the Pixel 6. I was persuaded to get one, however, by the improvements in the camera, which are pretty doggone amazing.

Thus, I don’t regret my purchase of the Pixel 6, but it’s time for Google to admit that its flagship phone’s biometrics are crap.

The University of Alabama announced that they are replacing physical ID cards with a crappy app that runs on your cellphone or a crappy iWatch.

All roughly 8,000 incoming students, faculty and staff will be able to download a mobile ACT Card for iPhone or Android cellular device. Those with physical ACT Cards will still be able to use them, but if the card is lost it will be replaced only with a mobile card…

What could possibly go wrong?

Erm… How does one get into one’s dorm/office or buy food when one’s phone has run out of power? I’m sure the app relies on either NFC or Bluetooth–further sapping one’s phone’s battery.

This is obviously being done to save the University the few shekels it spent on issuing physical cards. What crap!

Consumer warning: I bought a Wireless Lit Solar Powerbank from LitMobile. It never worked properly. Even after more than 15 hours of solar-charging, the battery never got above 50%.

I emailed them to exchange it for another unit (or possibly request a refund). They referred me to RMA@LitMobile.us, which I then emailed. Never heard back from them. That was two weeks ago.

We have decided to move the Crappy Software blog once again.

For the past five years, we have been irregularly posting rants about crappy software on a self-hosted WordPress site at crappysoftware.tvcrit.com, to which we had moved after Blogger became intolerably crappy. Don’t get us wrong, we still like WordPress, but–good gawd!–it’s become such a target for hackers that plugging security holes has become a full-time occupation.

So, we’ve decided to make our new home on WordPress.com–where hopefully the security vulnerabilities are immediately fixed. Our new URL is clunky: crappysoftware.home.blog. And we’re too cheap to pay for an ad-free version of the blog. That’s why you’ll see some click-bait-y ads popping up every once in a while.

We started the Crappy Software Blog on August 24, 2005. In the intervening years, software has definitely not gotten any less crappy. And so we soldier on…

I suppose it’s good to know there are some constants in the universe. Like, when AT&T says a technician will be there between 8:00 a.m. and noon, you can count on them NOT being there in that time window.

Also, AT&T’s online chat bug is “busy.” Thanks for nothing.

A new addition to my “In Order to Serve You Better, We’re Now Going to Fuck Your Over” folder! flickr is eliminating its one-terabyte-free option “in order to serve me better”. Free accounts continue, but are limited to 1,000 photos.

The most galling part of flickr’s announcement is how it says, in bold print, “Let’s be candid“, but then is anything but candid when it hides the fact that photos above the 1,000 limit will be deleted. This information is hidden in an asterisked footnote in tiny print.

And it doesn’t just say, “photos will be deleted.” Rather, it says, your “content [will be] actively deleted.” Content? Why not just say “photos and videos”? I mean, wouldn’t that be the “candid” way to put it?

Oh, and it says that three months is “ample time” for users to make other arrangements.

flickr, you used to provide an amazing service. Ending that service in this manner is crap. 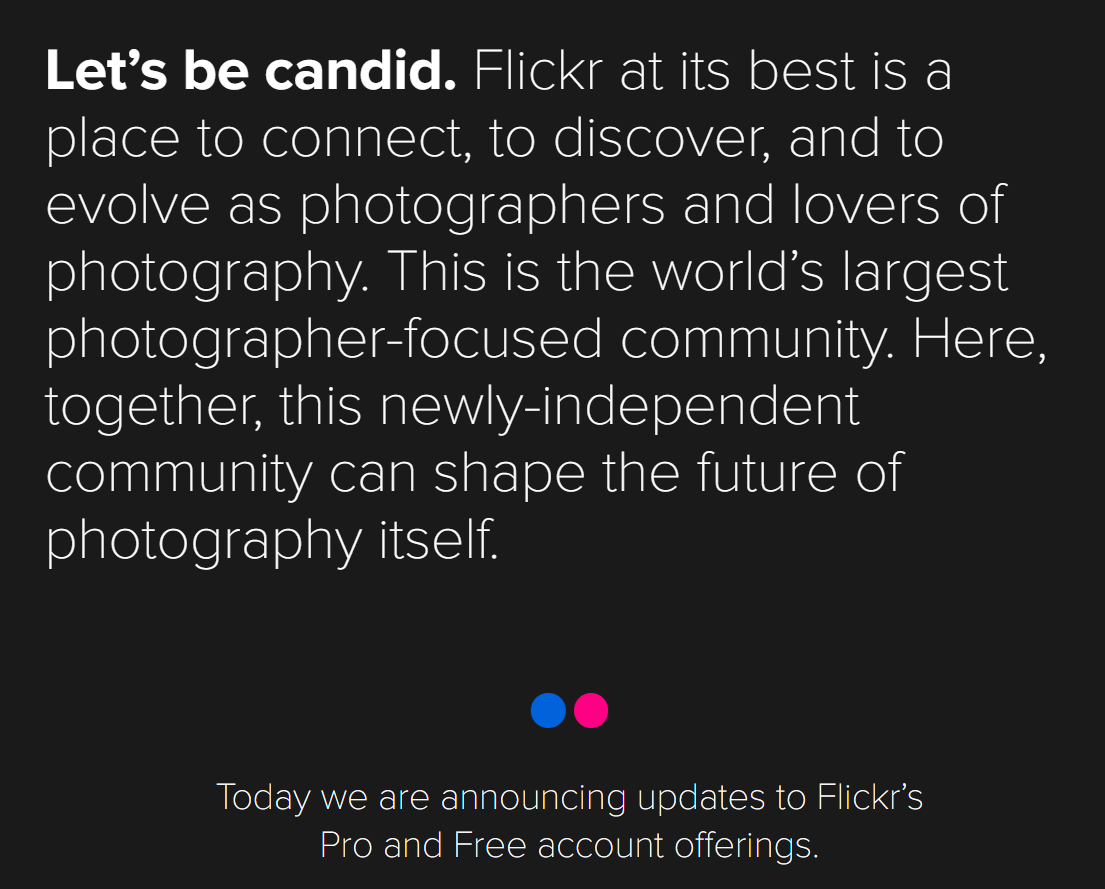 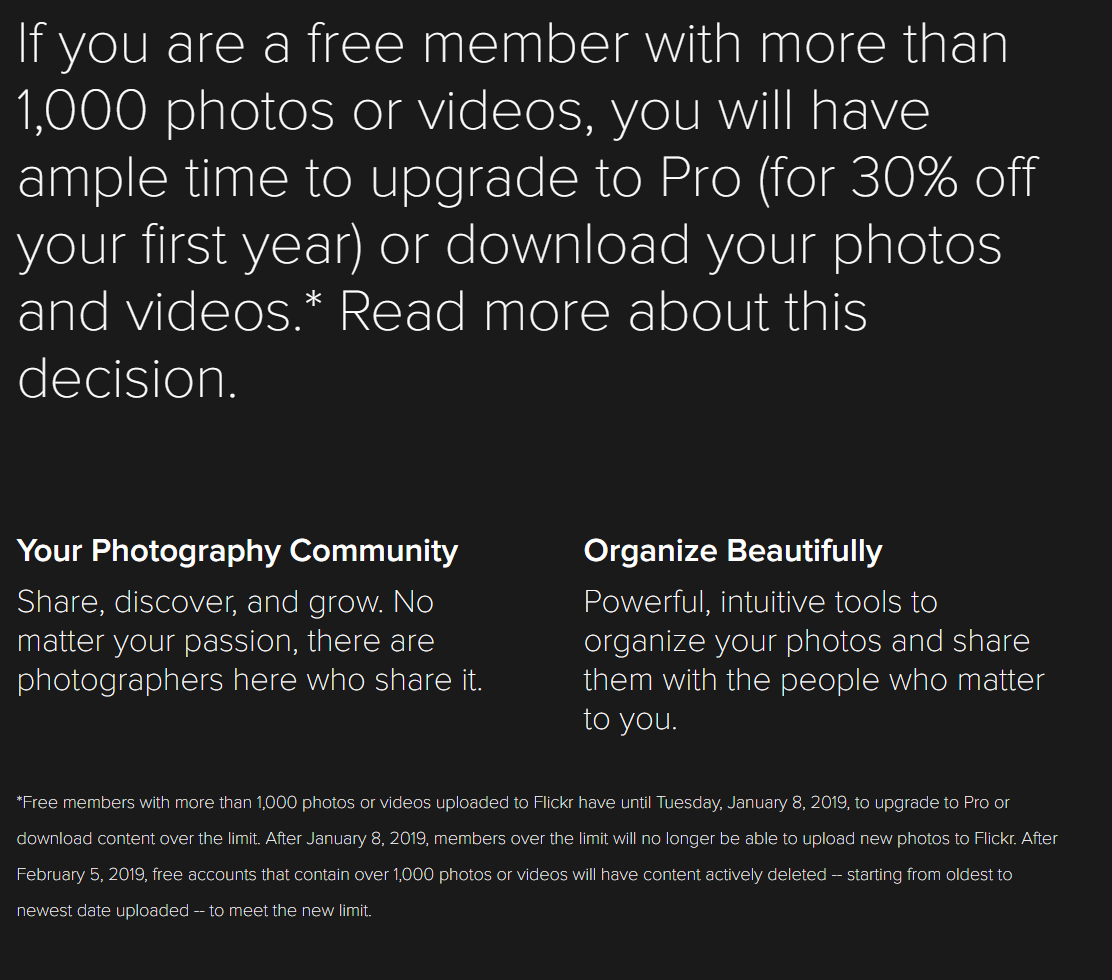 Well, at least no human had to demean themselves and read this crappy robocaller’s crappy script.

From the headquarters which will get expired in next 24 working hours. And once it get expired after that, you will be taken under custody by the local cops as there are four serious allegations pressed on your name at this moment. We would request you to get back to us so that we can discuss about this case before taking any legal action against you. The number to reach us is 425-382-5691. I repeat 425-382-5691. Thank you.

Oh, MoviePass! You were such a dream service for movie professors… until you implemented a policy requiring photographs of ticket stubs and then introduced bugs into your app so that it would not accept said photographs.

So, now your Android app has 5,495 one-star reviews–fully 47% of all submitted reviews.

You even provoked me to write a review and that’s only about the third time I’ve done so.

Here’s the transcript of what I wrote:

App crashed when I tried to take a photo of a ticket stub–a new, hinky method to limit abuse of subscriptions. Now I’m prompted to submit a photo (which the app won’t accept) and effectively blocked from accessing my PAID subscription because the app won’t go beyond the photo screen. Extremely poor implementation of a dumb policy.

Still another item from the “In Order to Serve You Better, We Are Now Going to Fuck You Over” file:

Today we’re launching some changes on Google Images to help connect users and useful websites. This will include removing the View Image button. The Visit button remains, so users can see images in the context of the webpages they’re on. pic.twitter.com/n76KUj4ioD

Really, Google? You’re really making this change to “help” users? The motivation for making your image search less useful is to help us?

Oh, wait, maybe the change is not to help us:

For those asking, yes, these changes came about in part due to our settlement with Getty Images this week (see also https://t.co/a5uFldOcih). They are designed to strike a balance between serving user needs and publisher concerns, both stakeholders we value.